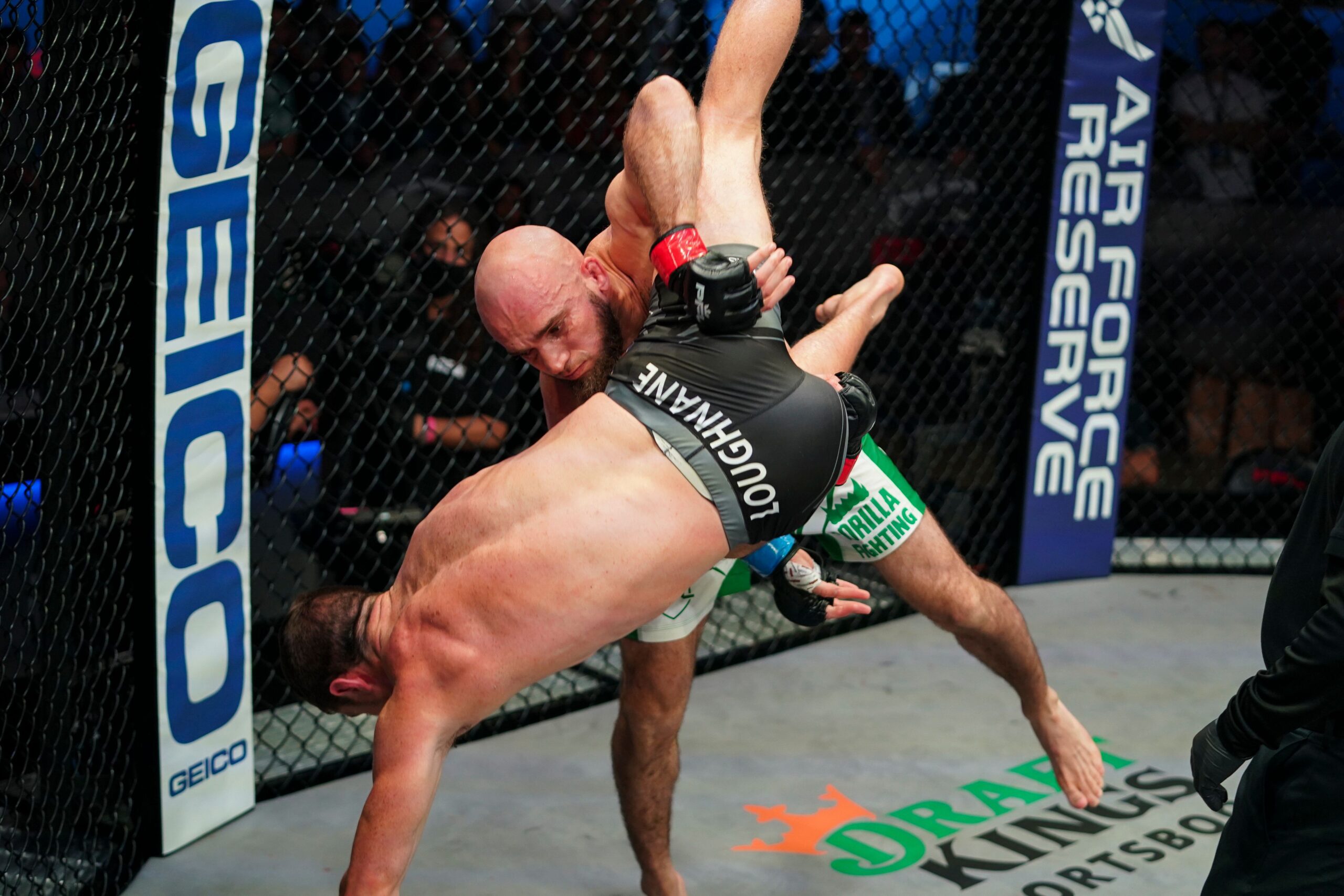 HOLLYWOOD, FL. – August 27, 2021 – The Professional Fighters League (PFL) concluded its 2021 semifinal slate with the final four contenders across the featherweight and light heavyweight divisions battling for spots in the world championship. In the night’s main event, Movlid Khaybulaev defeated Brendan Loughnane by split decision to clinch a spot in the PFL World Championship.

In the co-main event, Chris Wade put on an impressive performance against 3-seed Bubba Jenkins in the first featherweight semifinal matchup, winning by unanimous decision. Following back-to-back PFL Semifinals exits as a lightweight in 2018 and 2019, Wade’s move to the featherweight division for the 2021 season proved to be fruitful, as he earned his first-ever trip to the PFL World Championship.

In a light heavyweight semifinal matchup, top-seeded Antonio Carlos Jr and 2019 PFL Champion Emiliano Sordi went the distance in a closely contested bout. In the end, Carlos Jr prevailed via unanimous decision victory and secured his spot in the world championship in his first PFL season. Marthin Hamlet clinched the first PFL World Championship berth of the night, defeating Cezar Ferreira by TKO in a light heavyweight matchup.

The Tonsberg, Norway native moves to 8-2 overall, with six of those victories coming by way of stoppage. “Tonight capped off a thrilling month of win-or-go-home action that only PFL can deliver for MMA fans around the world,” said Peter Murray, PFL CEO. “The final four contenders from the featherweight and light heavyweight divisions put it all on the line and I can’t wait for the biggest night in the sport on October 27.

Twelve fighters across six divisions will strive to forever change their legacies by becoming world champions and earning the $1 million prize.” “I want to congratulate the four fighters who booked their spot in the PFL World Championship on October 27,” said Ray Sefo, President of Fighter Operations of PFL. “Our league is a true meritocracy where everything is earned and we can’t wait to crown our new champions.”

In the last bout of the ESPN+ undercard, Sheymon Moraes defeated Lazar Stojadinovic via 2nd round TKO (4:45), improving his PFL record to 2-1 with two consecutive victories. In the final light heavyweight action on the undercard, Chris Camozzi earned a unanimous decision victory over Cory Hendricks, notching his second-straight win in the PFL SmartCage and pushing his overall record to 27-15.

In a featherweight showdown, Anthony Dizy went the distance with Jesse Stirn, earning a victory via unanimous decision to move his career MMA record to 14-4. Leading off the ESPN+ card, Brandon Jenkins defeated Jacob Kilburn by 1st round KO via flying knee (2:56) in a showcase bout. In a hard fought battle, Alejandro Flores defeated Carl Deaton by split decision.

Professional Fighters League (PFL) is the first and only to present MMA in the sports-season format where individual fighters compete in Regular Season, Playoffs, and Championship. PFL is the innovation leader with the PFL SmartCage delivering viewers on-screen fight analytics and real-time prop bets. PFL Roster is second to none with 25% of its fighters ranked in the top 25 in their weight-class.

All PFL 2021 Season events are live in primetime on ESPN2/ESPN+ in the U.S. (typically on Thursdays), as well as on leading broadcast and streaming outlets in 160 countries worldwide. For more info visit www.PFLmma.com and follow PFL on Instagram (@PFLmma), Twitter (@PFLMMA), and Facebook (/PFLmma).